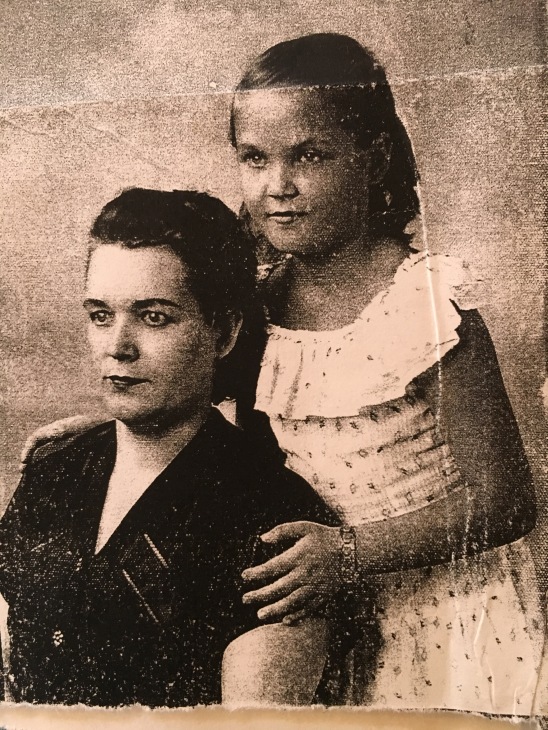 The refugee boat docked in Lubeck, Germany, and Anna and Irena shuffled off with all the other Latvian refugees looking for a fresh start. Anna eventually made her way Berlin, some 286 kilometers away.

The life of a WWII refugee is one of temporary refugee housing, moving from place to place, trying to find temporary work, air raid sirens, bombings, and emotions that waver between constant low-grade anxiety to full blown panic. Especially if that refugee is a single mom with a young child.

One night, while Anna and Irena were fast asleep in their small refugee apartment, air raid sirens split the quiet night air. Irena sat upright in bed, fully awake, heart pounding.   Anna rushed over to Irena’s bed and shook her awake:  “Irena!  Get up, we have to go!”  Irena sat up in a daze as her mother grabbed her by the wrist and pulled her too strongly out of the bed.  They headed for the front door of the apartment.  When Anna opened up her front door, they came face to face with Anna’s girlfriend, who was also flying down the staircase.  The two women grabbed one of Irena’s little hands each and ran as fast as they could down several flights of stairs, with Irena in the middle.

As they turned a corner in the stairwell, suddenly there was a huge flash of light and a very loud BOOM through the large glass window that they were directly beside. The boom was so loud and the flash was so bright that the women instinctively stopped and put their hands over their heads – expecting an immediate explosion of glass.

Incredibly, the glass window held. By some miracle, they were saved from the shattering of glass and the destruction of the bomb.

The women hastily made their way to the basement into the air raid shelter. There were many men, women, and children all crammed together in this small room, but the room was far from safe, or peaceful.

“We’re all going to die,” a woman next to Anna shrieked.

“God help us!” Another man yelled.

As the bombs exploded throughout the city, the people in that little bomb shelter in Berlin continued to scream and yell. Anna hugged Irena tightly to her chest in a protective cradling position.  After what seemed like an eternity, the last bomb fell and all grew quiet.  The frazzled group then slowly emerged from the shelter and headed back up to their apartments in a daze.  Sleep was elusive that night.

The next morning Anna took Irena outside to survey the damage. The smell of exploding bombs and fire was alive in the morning air.  As she turned the corner of their apartment building, she stopped cold. There, on the ground, was a large bomb that had been dropped from the sky, but that had not exploded.  For some reason, this bomb had not detonated.  Anna realized that this bomb was positioned right near the corner of their air raid shelter, just a few feet from where Anna was huddling with Irena the night before. Had the bomb went off, they would’ve all been killed.  Anna silently prayed a prayer of thanks to the Lord for his protection.

Anna and Irena eventually left Berlin for Leipzig – where there were more air raids and more bombings. Many nights Anna and Irena made their way to air raid shelters as different cities were under attack.  Many nights the two of them spent huddled in fear with other refugees, all of them not sure if they would make it through the night.

About this time, Anna finally got some good news: she had received a job in Austria, working as a cook in a boarding school for Austria’s wealthy children. She would have food, shelter, safety, and a little bit of money.

“Irena, we are going to Austria! Mommy has a new job!” Anna smiled down at Irena while the little girl looked back at her with trusting eyes.  It was not possible to give Irena any semblance of a normal childhood, but perhaps with this new job, Anna and Irena would be able to find some safety and security for at least a small season.

Before reaching Austria, however, they had one more city to stop in to catch a train for their new destination.

They had to stop in Dresden, Germany.

To read the next and best part of this whole series, click here: Escape from Latvia part V – Last Train out of Dresden